The National Pension is a public pension system with compulsory coverage for all registered residents[1] aged 20 to 59 years.

There are two main systems and at any point in time an individual will be in either system.

A minimum period of 10 years of contributions, exemptions or postponements is ordinarily required to receive either Kokumin or Kousei Nenkin pensions.

Kokumin Nenkin (国民年金, 老齢基礎年金) is the base pension system. All registered residents[1] of Japan aged 20 to 59 years must be covered by the National Pension system.

Those registered in Kousei Nenkin (厚生年金) and dependent spouses of Kousei Nenkin-covered individuals automatically have their contributions covered.

Other individuals need to register for Kokumin Nenkin and pay directly. In such cases, a monthly contribution (¥16,610 from April 2021 to March 2022; subject to annual change), is to be paid by the individual.

120 months (10 years x 12 months) of contributions, exemptions or postponements are ordinarily required to receive a pro rated pension if the full 480-month period is not met. There are some exceptions to this 10-year rule.

The following are the very limited exceptions to Japan residents requiring compulsory coverage:

1. Foreign nationals with either of the following status of residence[2]:

2. Individuals whose circumstances mean that a Social Security Agreement deems them liable for social insurance contributions to another country rather than Japan (this includes people seconded to Japan from relevant countries for short to medium term)[3]

Excepted periods are different from exempted periods. Time with exceptions does not count towards the 10-year qualifying period.

For example, an individual granted a full exemption in 2021 will pay no contributions, and this exempted period will count for half the level of benefit of a non-exempt period.

See here for further details about exemption and postponement, including an annotated application form in English.

The following groups of people may be able to apply to a postpone their contributions:

This protects your status in the national pension system. Should you become disabled or die, the relevant payments to yourself or next of kin would happen as normal. These postponed years count as qualifying years (towards the 10 years of contribution threshold necessary to receive a pension), but do not count for benefit purposes. Postponement is different from exemption in this respect. Individuals who have been granted a postponement will have 10 years to make the contributions if they wish to qualify for the benefits. An indexed rate of contributions will be applied if the contributions are not made within three years of the postponed period.

See here for further details about exemption and postponement, including an annotated application form in English.

Three categories of people are eligible to make voluntary contributions:

The first category might be relevant to foreign nationals or naturalised citizens who moved to Japan after age 20 and will therefore not have accrued 40 years of contributions by age 60.

Exceptions to the 10-year qualification period

Ordinarily, at least 10 years of record in the system (ie contributions or exempted periods or postponed payment periods) are required in order to receive benefits.

However, there are a range of scenarios in which ‘empty periods’ (between ages 20 and 60) can be counted towards this 10-year qualification threshold. Colloquially these may be referred to as カラ期間 (‘’karakikan’’, empty periods) in Japanese. Full details can be seen here (Japanese), but readers’ attention is drawn to the following cases:

Fuka nenkin (付加年金) is a small top-up to the pension available to individuals enrolled in Kokumin Nenkin. Contributions are ¥400 per month, and the benefit will be an extra ¥200 yen per month (per month of contributions). This equates to annual contributions of ¥4,800 and an annual benefit of ¥2,400.

Further details can be found on the Fuka nenkin page.

Employee income for calculating contributions is currently capped at ¥650,000 per month salary and up to two annual bonus payments of ¥1,500,000 each.

Any Salary or bonus payments in excess of those amounts will not form part of the calculation for Kousei Nenkin contributions.

Contributions into Kousei Nenkin are borne equally between the employee and the employer.

The calculation is 18.3% of in scope remuneration. Standard employees will see a deduction of 9.15% from salary. Monthly salary up to the ¥650,000 limit is split into 32 bands as detailed in the below table. 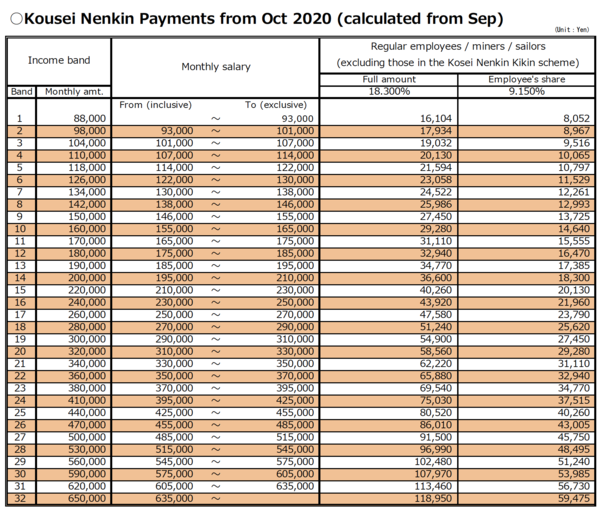 The latest tables can be navigated to on the Japan Pension Service🇯🇵 Website.

Q1 Do I have to pay Kokumin Nenkin?

If living in Japan aged between 20-59 then yes. You may also speak to the Pension office to discussion exemptions..

Q2 I've not been paying Kokumin Nenkin. How far back can/should I pay?

Two years is the limit for back payments.

Q3 How do I find my nearest pension office?

See the link below.