iDeCo, short for individual Defined Contribution pension (個人型確定拠出年金), is a highly tax-efficient investment account. Contributions of the same amount are invested monthly, and cannot be withdrawn until you are 60 years old. At most providers, withdrawals can be taken as a lump sum, an annuity, or a combination of the two.

The principal benefits of iDeCo are:

Due to these benefits, iDeCo is a good first choice for investors who are earning an income, and are going to be in Japan long term. For investors who are less sure about their future, NISA or Tsumitate NISA are more flexible tax-efficient choices, but iDeCo has the significant advantage that deposits are not subject to income tax.

iDeCo accounts can be maintained tax free until 75 years old, but no new contributions can be added after you turn 65.

In principle, all individuals enrolled in the Japanese pension system are eligible to contribute to an iDeCo, with the following exceptions:

NB Category 2 subscribers with exemptions for maternity leave or childcare leave are permitted to contribute.

Contributions are ordinarily made monthly, and can be from ¥5,000 up to the maximum in ¥1,000 increments. The maximum monthly contribution varies according to the circumstances of the subscriber, as summarised below.

Please note that some of the language on the table on the official English iDeCo site can cause confusion, eg

Category 1 and 3 subscribers pay their contributions via automatic monthly debits from their bank account.

When eligible (see table below), subscribers have the following options to receive benefits:

If opting for a lump sum, a tax free amount will be calculated based on years of contribution. This is a Retirement Income Deduction (退職所得控除), and may be shared with other retirement income.

If opting for a pension, a Pension Tax Deduction (公的年金等控除) applies.

Eligibility criteria, taken verbatim from the iDeCo English site, are as follows:

Further details on the process of lump sum withdrawals can be found on the iDeCo English site.

The full list of iDeCo providers is available in Japanese on the official site (Japanese).

There are many providers, but SBI, Monex, and Rakuten are especially useful due to their low fees, and availability of low-cost index-funds.

SBI and Monex have completely separate systems for iDeCo compared to their regular securities accounts. For iDeCo, you will log in to a different website with different account credentials. Rakuten has an option to manage the iDeCo from within the same account.

Because of this, there is little benefit to picking the same iDeCo provider as an existing securities account, unless you use Rakuten. It's best to pick the provider that best satisfies your needs (cost, fund selection, etc.).

must declare their iDeCo contributions on their end of year tax adjustment in order to receive a refund of the tax paid on contributions with their December salary.

Employees whose payments are deducted from their salary (事業主払込) should already have had the tax calculations applied to their salary, so do not need to declare iDeCo information on their end of year tax adjustment.

The National Pension Fund Association should send a certificate in the post (小規模企業共済等掛金払込証明書) around October/November stating the contributions made to date, and including predicted contributions until the end of the year. 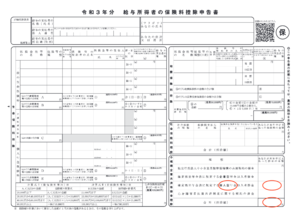 Where to claim the deduction for iDeCo on the end of year tax adjustment form.

If you have lost the NPFA certificate, you can request a copy.

If you do not complete the tax adjustment in time, or didn't include the iDeCo information, you can submit a tax return instead.

Many thanks to the following RetireWiki.jp users for writing this article: