Japan has an inheritance tax (相続税, souzokuzei) rather than an estate tax, meaning that it is the heirs who are individually liable for taxes due on assets left behind by a decedent. Given the potential for confusion that results from this focus on heirs and from relevant statutory regulations, executors often rely on the services of scriveners, tax accountants, and lawyers to administer a decedent's estate. All estates receive a basic inheritance-tax deduction, and inheritance taxes themselves are calculated at marginal and progressive rates. Transnational inheritance introduces an additional layer of complexity that can make administering the estate a fraught process in situations involving multiple nationalities and domiciles. The following sections describe important features of the system, but the explanations should not be construed as being definitive.

Central to understanding how the inheritance-tax system works is the concept of a statutory heir, or houtei souzokunin (法定相続人). Any executor must first determine how many statutory heirs exist, calculate the overall inheritance tax liability based on that number, and then, if necessary, file an inheritance-tax return according to the actual distribution of assets (typically this is a unified return, although each heir is responsible for a single portion of the tax and may choose to file an individual return instead). Statutory heirs have the right to abandon their status, but they are always included in calculations regarding the basic inheritance-tax deduction.

Statutory heirs always include the surviving spouse. Beyond that, three orders of precedence exist, with individuals in lower categories ineligible once statutory heirs in a higher category have been identified.

The following table illustrates several possibilities resulting from application of the civil code to the distribution of a decedent's assets when there is a surviving spouse:

One enterprising Japanese website has actually gone to the trouble of listing 55 possible combinations of statutory inheritance shares. It bears repeating that these statutory inheritance shares are not legally binding requirements. Statutory heirs are in fact free to agree to any distribution they deem appropriate as long as that agreement is unanimous, but the need for consensus means that when disputes do arise, inheritance can turn into a long and stressful process. Composing a will and/or making use of the early-inheritance system can help ensure that inheritance will proceed relatively smoothly, at least at the procedural level.

Posthumously retained, or guaranteed, distributive shares only come into play when the decedent has left a will that seems to deprive a statutory heir of fair treatment (statutory heirs, on their own, are expected to come to a unanimous agreement). The "wronged" individual must proactively claim that his or her right to a guaranteed distributive share has been violated, and the legal system takes it from there (the statute of limitations for claiming such distributive shares is 10 years). Given the existence of these legally mandated shares, it is important to bear them in mind when composing a will.

Here is a table listing the most common combinations of distributive shares retained by the decedent's statutory heirs (the maximum proportion of an estate subject to these shares is 50%):

To repeat: posthumously retained distributive shares cannot be negated by a will, but they must be claimed to be received.

Once the number of statutory heirs has been determined, the basic inheritance-tax deduction for a decedent's estate is calculated according to the following formula:

Next, the tax for each statutory heir is calculated according to the following tax table, which uses deductions as a way to account for marginal increases in the inheritance-tax rate:

The sum of these amounts is the total inheritance tax due, which in this case equals 4.75 million yen.

Finally, the inheritance tax to be paid is apportioned in accordance with the actual distribution of assets among all the beneficiaries. The total tax burden remains the same, but assets can be distributed so as to make use of certain special tax deductions, thereby minimizing current and future inheritance-tax payments. For example, a spousal deduction is available which ensures that a surviving spouse is highly unlikely to be liable for any inheritance tax on any distributed assets. This deduction is currently set at 160 million yen or 50% of the value of the estate, whichever is larger. Thus, in our example, if the heirs agree that the spouse should inherit the entire estate (and assuming that the decedent had not made use of the early-inheritance tax system), the spousal deduction would easily exceed the total tax due and no inheritance tax would need to be paid at all. But if the spouse is very elderly, it's likely that these inherited assets would in the near future be subject to a "secondary" inheritance tax, potentially making such an arrangement less advantageous than transferring some assets immediately to the children in order to lower the taxable value of the spouse's estate (the number of statutory heirs will be lower when the spouse dies, and the value of the estate correspondingly larger, possibly resulting in a higher marginal tax rate). This is where it would definitely pay to obtain advice from a qualified professional.

One last, sometimes unexpected point: beneficiaries who are not spouses or first-degree blood relatives of the decedent (interpreted to include adoptive parents, formally adopted children, and grandchildren who are skipped-generation statutory heirs) have a 20% surcharge tacked on to their individual tax bill after it has been calculated normally. See the National Tax Agency website or this thorough explanation for more information in Japanese about the souzokuzei no ni-wari kasan (相続税の2割加算).

Inheritance becomes more complex when decedents or heirs are "limited taxpayers" as a result of having an overseas domicile, temporary residence in Japan or, in the case of Japanese nationals, extended residence abroad. Such considerations affect the visibility of the decedent's assets to Japanese tax authorities. The basic rules remain the same, but the calculations become more nuanced (they are being passed over here for the time being).

Here is a table that summarizes the various permutations based on nationality and domicile (juusho 住所). The same rules, by the way, hold for both inheritance tax and gift tax : 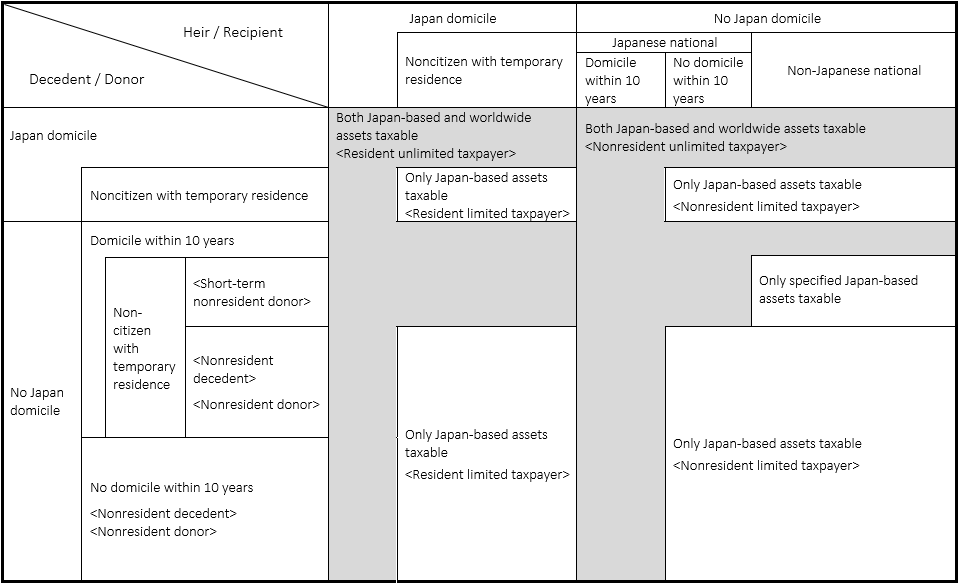 Note that "home country" law takes precedence over Japanese law regarding the actual distribution of the assets of a decedent who is not a Japanese national. However, Japanese inheritance tax will be assessed according to the number of statutory heirs, their status as unlimited or limited taxpayers, and the visibility of a decedent's assets as indicated by the table above. Seeking advice from a qualified tax professional would seem to be the wisest course of action to take when transnational inheritance is involved.

Major changes to inheritance tax with respect to gifting will take effect on January 1, 2024, assuming that the final law conforms to the current cabinet-approved proposal. Two in particular are worth noting. First, the look-back period for including gifts in the value of a decedent's estate will be extended from three to seven years. This rule applies to statutory heirs, to others named in wills, and to recipients of life-insurance proceeds. To soften the blow, a new 1-million-yen deduction will be applied to gifts that took place more than three years before the decedent's death. For those who have gifted the maximum amount to multiple individuals in the seven years before their death, the result will be a substantial jump in the amount of assets potentially subject to inheritance tax. Because 2024 is the first year the revised tax code applies, 2027 is actually the first year from which gifts from decedents that took place more than three years earlier will be subject to the look-back. The seven-year look-back will therefore be fully in place from January 2031.

The second major change concerns the early-inheritance tax system, which allows parents or grandparents to gift a tax-free total of up to 25 million yen to children or grandchildren, with the understanding that the value of the gift(s) be included in the donor's estate at the time of death. Up to 2023, taking advantage of this special deduction has meant that the usual annual 1.1-million-yen tax-free gift allowance is no longer in effect for that particular donor, meaning in turn that gift-tax returns had to be filed by recipients for gifts of any value from the same donor (excluding gifts considered to be in accord with standard social norms).

Beginning in 2024, those who make use of the early-inheritance system will also be able to make annual tax-free gifts of up to 1.1 million yen to their designated beneficiaries. Moreover, it appears that these gifts will not be included in the value of the decedent's estate regardless of how recently they were given. This change -- should it be confirmed by the language of the final law -- can be considered one of the few significantly advantageous aspects of the tax-code revision for taxpayers, and may actually serve to promote the government's stated goal of encouraging the early transfer of assets between generations, even if also generates a certain amount of uncertainty regarding the financial security of long-lived seniors.

Remember that grandchildren do not usually qualify as statutory heirs (the exception being when the decedent has been predeceased by a child with children of his/her own), nor do children's spouses or any other in-laws. This means that, unlike statutory heirs, these relatives are not eligible for posthumously retained distributive shares, but neither are they subject to the look-back rule for annual gifts. Gifting grandchildren, the spouses of children, and other individuals as early and as often as possible is thus probably the best way to reduce the size of one's estate before one's demise.

Many thanks to the following RetireWiki.jp users for writing this article: